Activities of the Society over its first 50 years 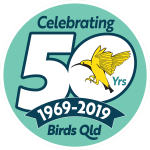 Birds Queensland (the Queensland Ornithological Society Inc) celebrated the fiftieth anniversary of its formation in 2019. It was a time to remember the successes of the past and to look forward to future opportunities to promote the scientific study and conservation of Queensland birds.

On 15th October 1969, a meeting was held in the Biological Sciences building of the University of Queensland. Thirty-three people attended and 18 apologies received from others interested. After discussion, the meeting decided that an independent and active group should be formed to encourage bird study. It was decided that the aims of the group would be ‘To promote the scientific study of Queensland birds and their conservation’ and these remain the objectives of Birds Queensland today.

Other decisions taken included that monthly meetings would be held with a break of possibly two months during the summer. Outings, expeditions, a newsletter and assisting the Queensland Bird Banding scheme were some of the recommendations agreed and it is interesting that these still happen today – standing the test of time.

Five names were suggested for this new group but those attending voted that the ‘Queensland Ornithological Society’ be recommended and confirmed at the first general meeting of the Society.

The Councillors elected to manage the Society were:

The first Council meeting was held on 21st October 1969 and the first General Meeting on 5th November 1969.

At the first General Meeting, the constitution was agreed, and the emblem of the Society was also discussed. Sixty birds were identified as more or less typical to Queensland, but the Sunbird and the Golden Bowerbird were the most popular with the Sunbird being selected. At a Council meeting on 18th November, it was also agreed that a quarterly journal, to be called ‘Sunbird’, would be published.

The variety of activities held as well as articles in our newsletters throughout the year allowed all members to participate in some way in the celebrations. We now look forward to the next 50 years.