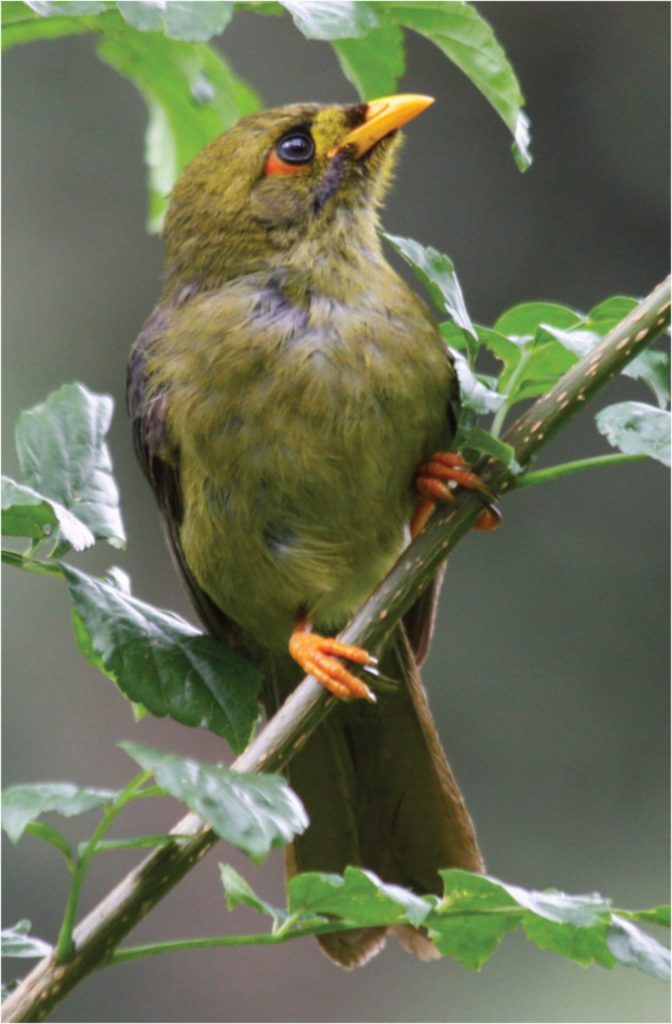 My favorite part of driving through Cunningham’s Gap is rolling down the windows and listening for the distinctive “Tink!” call of the bell miners (Manorina melanophrys). Unfortunately, here at the northern end of their range bell miners tend to spend their days high in the canopy of the foothills, and they can be tricky to observe closely. Bell miners are native honeyeaters closely related to the other Manorina species: the noisy miner (M. melanocephala), the yellow-throated miner (M. flavigula), and the endangered black-eared miner (M. melanotis). The closest genetic relatives of the Manorina honeyeaters are the Melidectes honeyeaters of New Guinea and New Britain, and the bell miner has retained the darker, greenish-brown plumage of the Melidectes instead of the light grey of the other miner species. Bell miners are the smallest of the miners with an average length of 18.5 cm, wingspan of 26.5 cm, and weighing only between 25-35 g, similar to a Lewin’s honeyeater (Meliphaga lewinii). Like the other miners, they have a distinctive bright, bare eye patch which is straw yellow as nestlings but develops to flame scarlet at full adulthood around two years old.

Bell miners range along the coast of Australia from Gympie in the north to Melbourne in the south. Colonies of eight to over 200 birds hold permanent, defined territories, primarily along the margins of sclerophyll forests with a high canopy, thick understory, and generally including a permanent water source. They particularly are drawn to thick patches of invasive lantana weed.

The majority of the bell miner diet consists of lerps which are the sugary secretions that are created to protect leaf insects known as psyllids (Psyllidae). It has been suggested that bell miners “farm” lerps by excluding other lerp eating species from their territory and preferentially prying the lerp away from the psyllid, which prompts the psyllid to create a new lerp. Most lerp specialists like pardalotes (Pardalotus) and other honeyeaters consume both the lerp and the high protein psyllid. Bell miner stomach contents analysis confirms that they sometimes eat both too, but at other times they have been observed carefully separating the lerp from the psyllid and only consuming the lerp. Bell miners are closely associated with eucalyptus die-off in some locations which may be a result of their farming practices allowing psyllid number to overwhelm the eucalyptus trees. However, eucalyptus ecosystems are complex, and research is ongoing as to the exact causes of die-off and the role that bell miners play.

Like the other miner species, bell miners are exceptionally aggressive for their size and successfully exclude most other avian species from their colonial territories. Bell miners’ incessant tink call which functions as both territorial call and contact call is used almost constantly throughout the day to drown out other species calls and discourage other birds from entering the territory. Surprisingly, bell miners are actually capable of 17 other adult and four juvenile calls, which are generally only heard at the dawn and dusk chorus. When tink calls are not enough, bell miners will also cooperatively engage in physical intimidation and chasing of any intruders, though some species that forage exclusively in the understory like thrushes (Turdidae) or fairy-wrens (Maluridae) are tolerated inside the colonial boundaries.
Bell miners have complex colonial social structures similar to the other miner species. Small groups of breeding pairs and mostly male nest helpers make up coteries with small defined territories within the larger colonial territory. In general miners have a bad reputation amongst bird watchers because of their aggression towards other species, but I find it fascinating that such small birds can hold permanent territories against much larger species. I think they are amazing little birds!