Why on earth is anyone interested in Noisy Miners and would want to write about them for the Bird of the Month? Love them or loathe them, they are an interesting species and seem to be on the increase through their range, especially in South East Queensland (SEQ). This is shown in Fig 1. 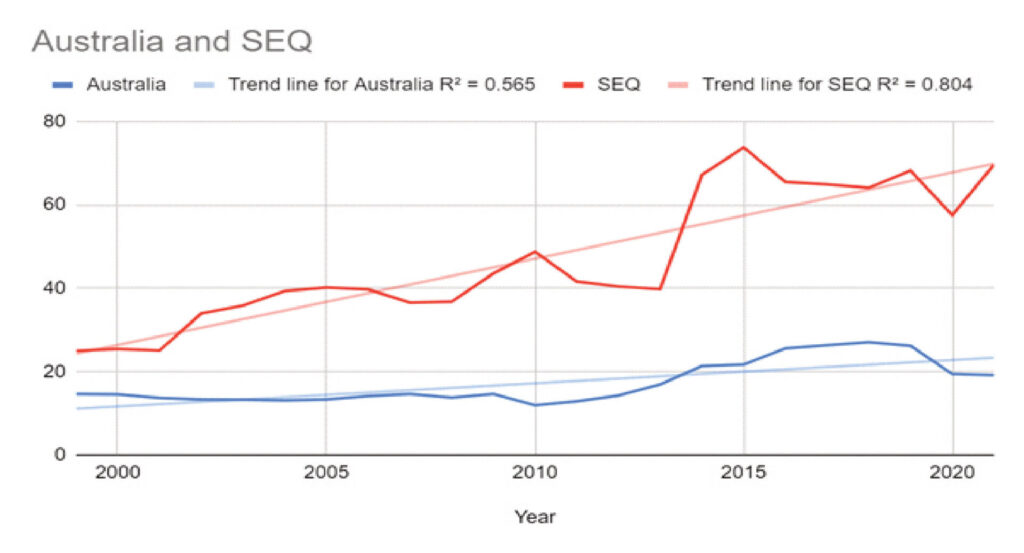 The relative abundance of Noisy Miners throughout their range in Australia and South East Queensland (SEQ) from 1989 to 2021. (Data from Birdata) © Stephen Prowse

The Noisy Miner is a grey bird, with a black head, orange-yellow beak and feet, a distinctive yellow patch behind the eye, and white tips on the tail feathers (Fig 2). As their name suggests, they are noisy. They are gregarious, and highly social; feeding, roosting and moving in flocks through their territory communally. 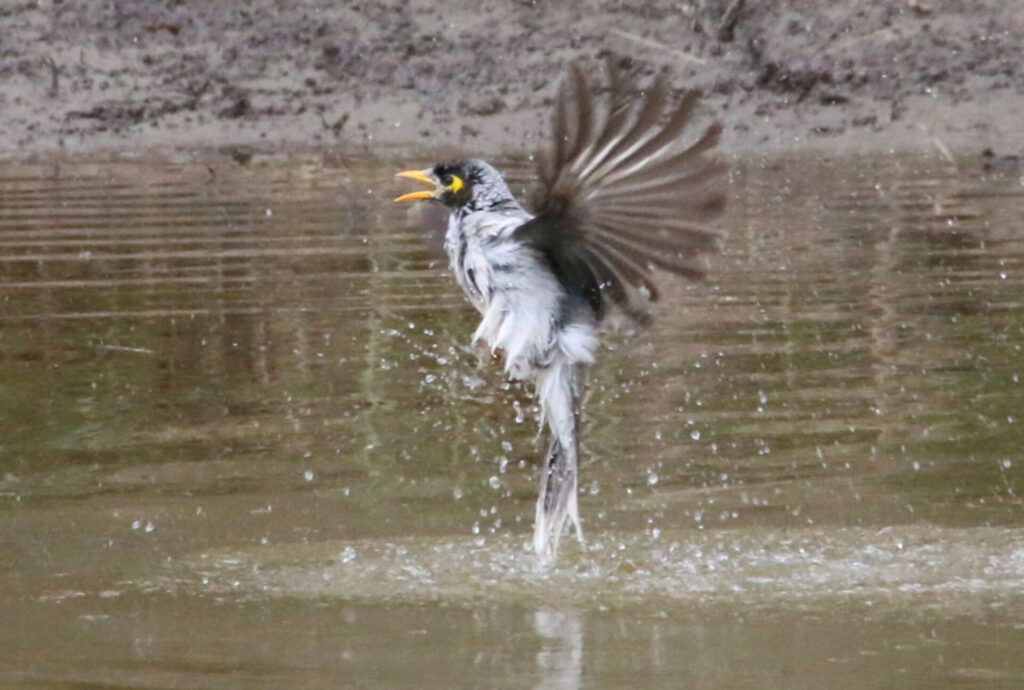 They are a fiercely aggressive bird (Fig 3), protecting their territory by collectively harassing, chasing and pecking intruders. They feed both in the canopy and on the ground, eating nectar, fruits and insects. They love the grevilleas in my garden. 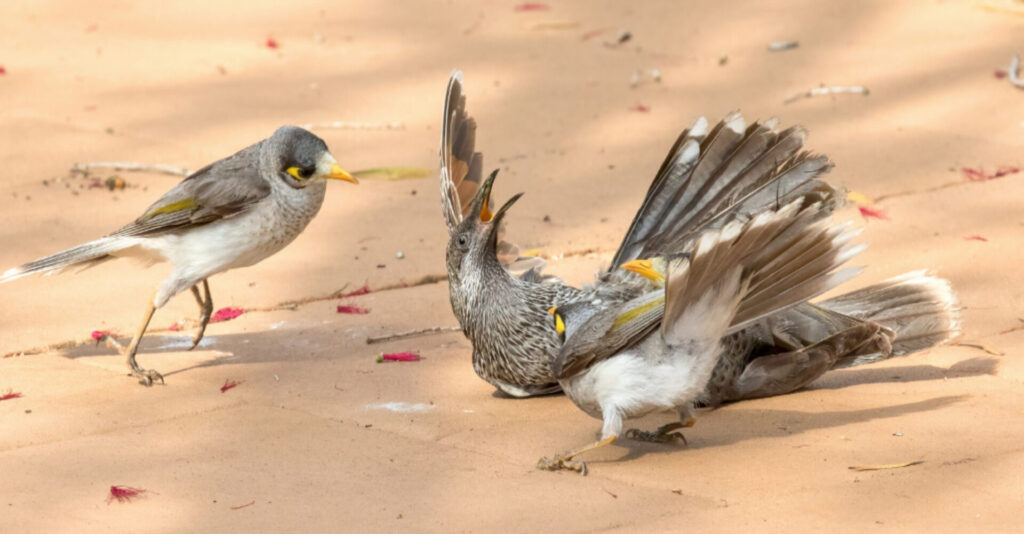 In thinking about why they are increasing, it seemed worthwhile looking at some individual sites around Brisbane where Noisy Miners are common. In looking at the abundance of Noisy Miners at Sheep Station Creek, Oxley Creek Common and Anstead Bushland, the numbers appear to be stable, maybe even decreasing at Anstead, certainly not increasing. Is it possible that “peak” Noisy Miner abundance has been reached at these locations? 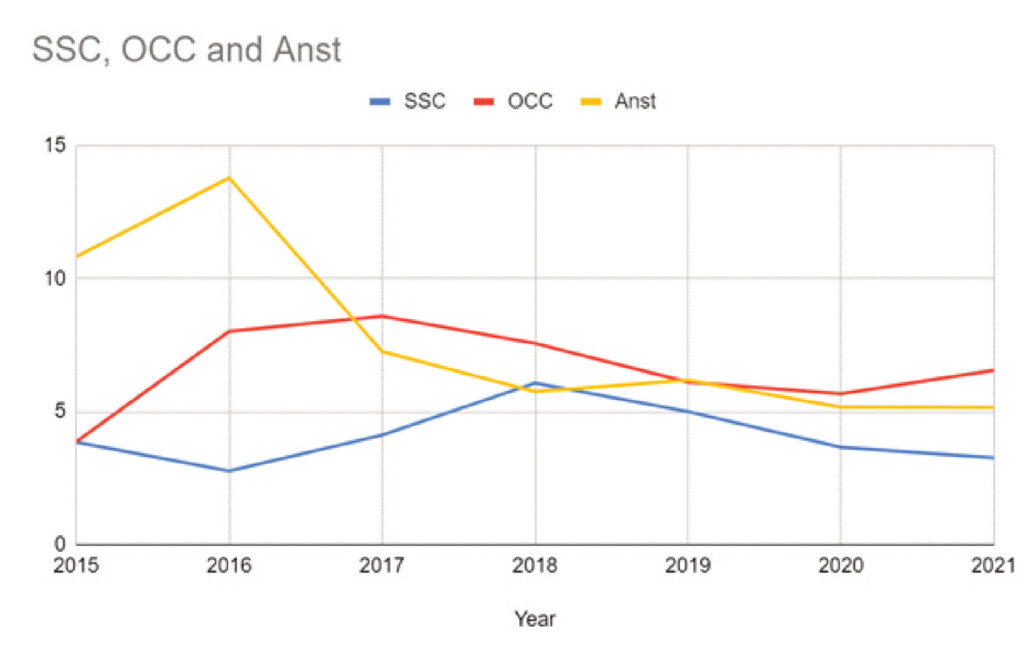 If equilibrium has been established in some areas, this poses the question, why are they increasing in SEQ? One possibility is that as they have adapted so well to the suburban and peri-urban environment, as land is cleared and houses are built, the new habitat becomes more attractive to noisy miners, especially if the houses, gardens and parks have a predominance of native plants to replace more open farmland, which is less attractive habitat.

It is also interesting to consider Noisy Miners in their natural habitat. After all, they were here before we cleared the land and developed suburban environments. Recent data from surveys in Presho/Belington Hut State Forests and Gurulmundi State Forest show that Noisy Miners make up approximately 19% of the birds seen in the former and 5% in the latter. Presho/Belington Hut State Forest is mostly Eucalypt forest with little understory. On the other hand, while being more disturbed with grazing, logging and mining, Gurulmundi has much more understory, a habitat the Noisy Miners seem not to prefer.

As I am writing this I am looking out the office window into a magnificent Golden Penda which was until now, in full bloom and full of Rainbow Lorikeets with not a Noisy Miner to be seen. As an aggressive bird, this did lead me to wonder where they sit in the avian hierarchy. As the blooms on the Golden Penda fade, there are only a few Rainbow Lorikeets and I now see Noisy Miners and Noisy Friar Birds and a few Brown Honeyeaters pecking at the fading blooms. Common Mynahs have also moved onto my property recently and seem to be thriving, even in the presence of plenty of Noisy Miners. Unfortunately they do not seem to compete for the same micro-habitat so the Common Mynahs are prospering.

Finally, no discussion on Noisy Miners would be complete without consideration of culling. I would certainly like fewer Noisy Miners in my backyard. Maybe Noisy Miners are the lesser of two Miner/Mynah evils. If the data above is correct and Noisy Miner equilibrium has been reached, culling would seem pointless unless there are relatively isolated pockets of birds that threaten rare or endangered species.