The ﬁrst time I saw a Plumed Whistling Duck was at the Queensland University campus near Gatton, not at the well- known Lake Galletly but across the road at the smaller Lake Lenore. There were several hundred, a few swimming, some standing on logs jutting out of the water, but most just standing on the grass at the edge of the water. I next saw them at Lake Apex in Gatton. This time there were a thousand or so, standing in a dense pack at the water’s edge. Despite spending most of the day roosting they will ﬂy oﬀ if disturbed or for whatever reason known only to themselves in a large ﬂock to go and settle around another wetland. Their movements are unpredictable; they may be in large numbers around a body of water one day but nowhere in sight the next. HANZAB states: ‘On water only after alighting from ﬂight’, while Menkhorst et al. state: ‘Swims reluctantly’. Nevertheless, I have observed them swimming – as in two of the attached photos – when they have not just alighted after ﬂight and they certainly did not appear reluctant. I have seen large numbers cruising lazily in Mamukala Wetland in Kakadu. Bird expert Phil Gregory told me he has often seen Plumed Whistlers ‘paddling about’ and said he was surprised at claims to the contrary. 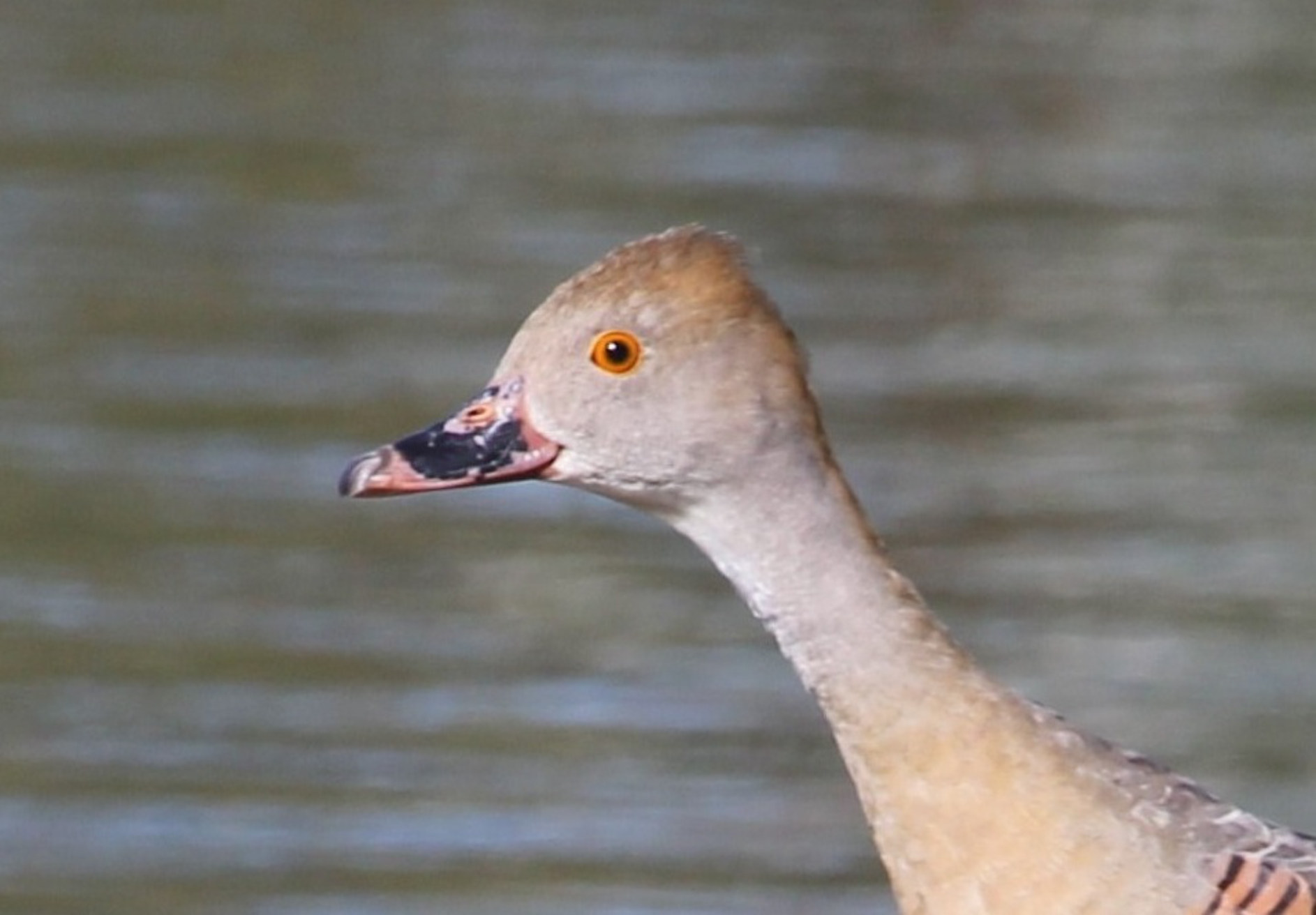 They are one of Australia’s most handsome ducks, having a cinnamon-coloured breast with narrow black bars and most distinctive long upswept feathers along the ﬂanks. The bill is mottled pink and black and, with their up-turned mouths, to my imagination they are always smiling. They now occur throughout the eastern states, NT and northern WA. A comparison of the distribution maps in HANZAB Vol. I (1990) and Menkhorst et al. (2017) shows they are spreading south; in the west they have extended in that time from Broome south almost to Shark Bay and in the east they have spread into SA. They are endemic to the Australian mainland but vagrants have been recorded in New Guinea and Tasmania. 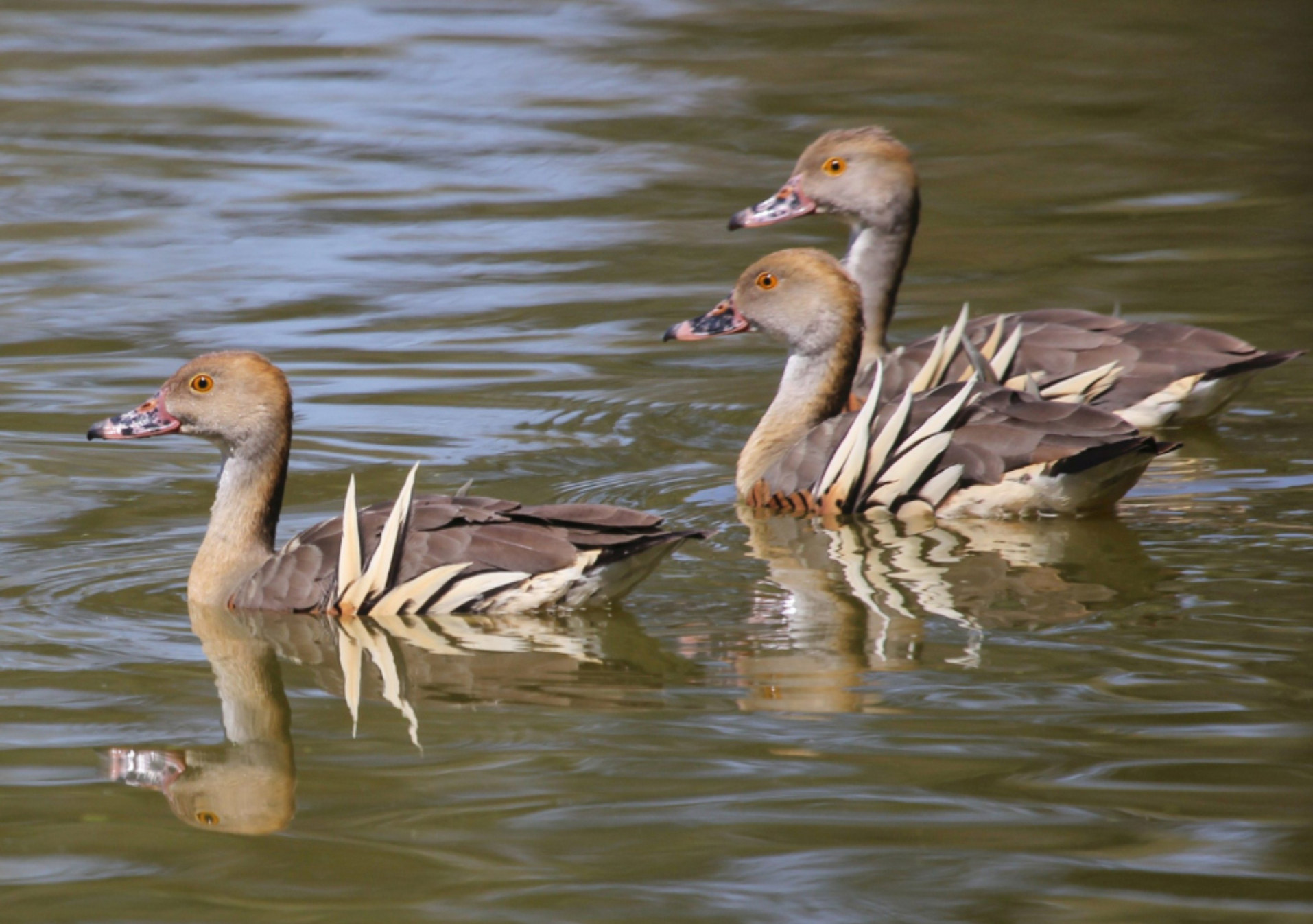 They are entirely herbivorous, feeding on grasses around wetlands. You are unlikely to see them feeding as they are nocturnal grazers. After loaﬁng all day at the water’s edge they move oﬀ at dusk to begin feeding, returning to their roost before dawn. The reason for the recent expansion of their range is partly due to agriculture, which has opened up new feeding grounds in pastures and irrigated lands. Although they roost in large ﬂocks they are monogamous, with pair-bonds probably life-long. The generic name Dendrocygna means ‘tree swan’. Despite this name they nest on the ground and eight or so eggs are laid. Breeding is mainly inland in tall grasses near wetlands. The name ‘whistling duck’ seems appropriate as their voice is described as a high-pitched whistle.

Around the world there are eight species of whistling duck (written ‘whistling-duck’ by most authorities except IOC). The Plumed is the only one endemic to Australia. The closely related Wandering Whistling Duck also occurs throughout New Guinea and eastern Indonesia as well as in parts of northern and eastern Australia. The Spotted Whistling Duck occurs in New Guinea and Wallacia. It ﬁrst appeared in northern Cape York quite recently, being ﬁrst reported in 1995, with the ﬁrst Australian breeding record in 2005, and it is gradually spreading south. It does not get a mention in HANZAB, having arrived subsequent to its publication. 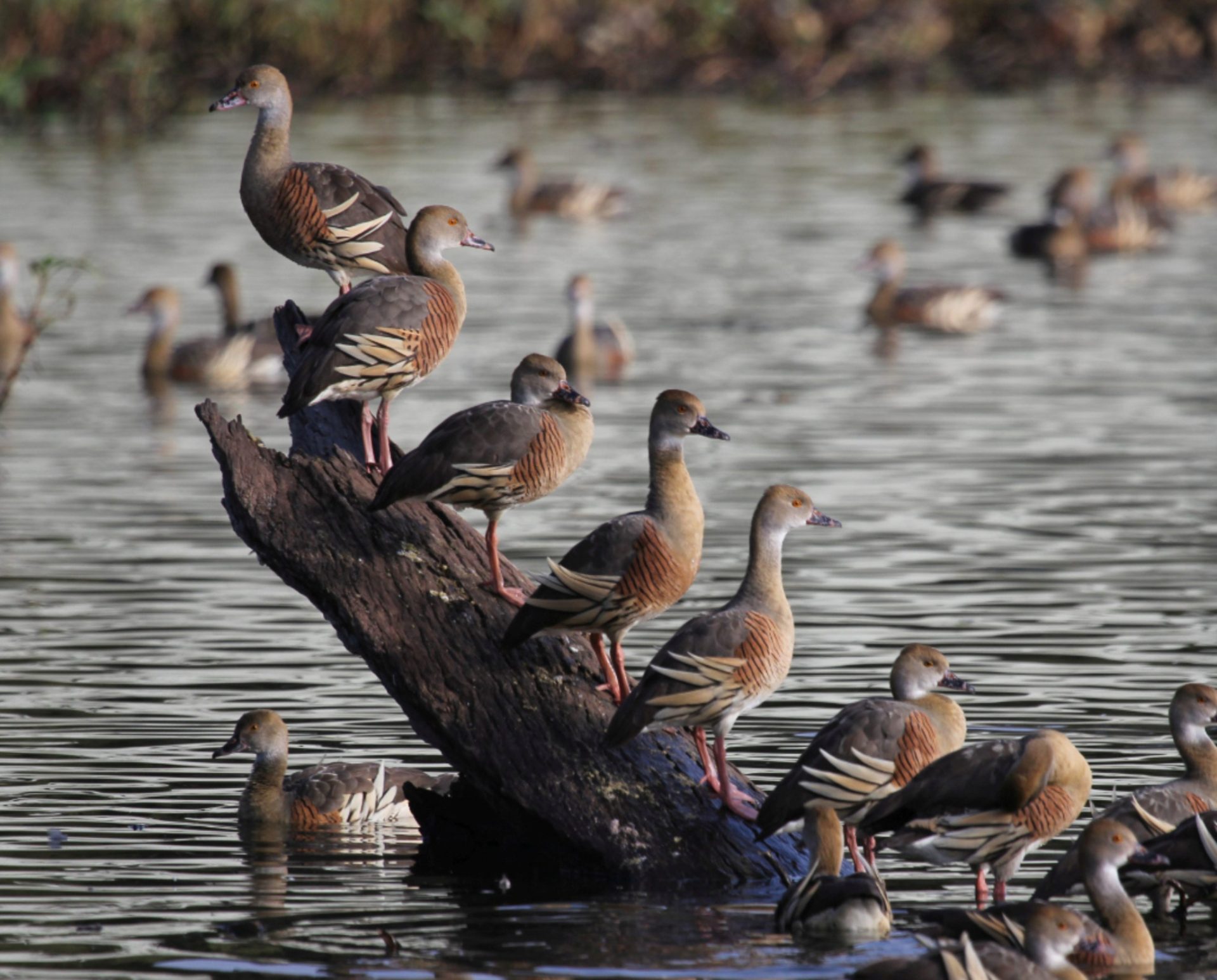