Pipits, lithe, slender and subtly-coloured, belong to the family Motacillidae and live in every habitable continent. The generic scientific name, Anthus, is from Latin, and refers to a small bird that inhabits the grasslands. Who would have dreamt that a member of these streaky, brown passerines would expedite the path to nature conservation?

A classic black and white film entitled ‘The Tawny Pipit’ released in Britain in 1944 was quite revolutionary in that it became a catalyst for change. The plot showed how residents of a small village during World War II joined forces to save the nest of a pair of rare Tawny Pipits from being disturbed by a major military training exercise. I saw this film as a teenager, and it was my first exposure to the word ‘pipit’. The film also highlighted and took issue with the now-illegal practice of collection of rare bird eggs. 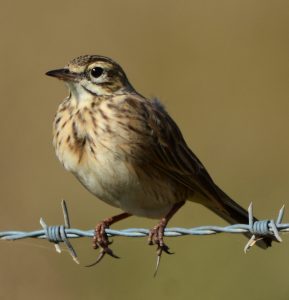 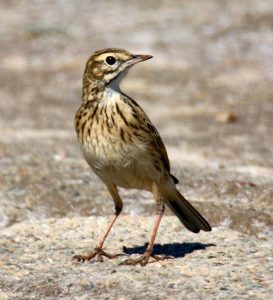 According to Thomas Pennant in 1798, the generic name ‘pipit’ is onomatopoeic from the call note of this species. J.D. Macdonald writes that it is apparently a modification of ‘piper’ from Latin pipio ‘to pipe or chirp’. Quite fascinating to me, are all of the colloquial names ascribed to these birds. Old folk names, no longer in use, include “chit-lark”, “peet-lark”, “tit-lark” and “titling”- these refer to the bird’s small size and superficial likeness to a lark. It follows then that “ground-lark,” the colloquial name for Australian Pipit makes sense.

The Australian Pipit, formerly known as Richard’s† Pipit, is an open country, ground-dwelling, small to medium-sized bird with a thin, piping voice. It is slender with an upright stance. It has cryptic plumage. From a dorsal view it shows muted hues of brown with mottling on the mantle and a longish brown tail. Its front is buff with brown streaks. A fawn to white eyebrow and a fine black streak down either side of the throat help to form an intricate face pattern, facilitating effective camouflage. It has a narrow, pale pink-grey bill typical of many terrestrial insectivorous birds and pale, flesh-coloured, long legs.

The most distinguishable diagnostic feature in the identification of the Australian Pipit can be observed in its foraging behaviour. It pumps or flicks its relatively long, white-edged tail up and down, reminiscent of its Motacillidae family representative in the ‘Old World’, the wagtail. Peter Slater, I think, captures the essence of the bird with this description. ‘The pipit wags its tail up and down between spurts of running on the ground.’ He further infers that this is ‘possibly a mechanism aimed at flushing out insect prey’. Pipits habitually perch on posts and can also often be spotted scurrying – never hopping, along roadsides. 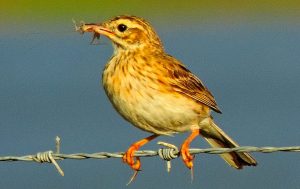 Invertebrates including insects and their larvae, earthworms, spiders, millipedes, crustaceans and snails make up the bulk of its diet augmented with seeds and vegetable matter. Pipits possess large feet and remarkably elongated hind claws which are thought to facilitate movement over uneven or unstable vegetation

Breeding pairs are formed after the male performs a conspicuous, undulating song-flight in which he climbs steeply with rapid wing-beats then swoops in a downward arc with wings raised and tail spread, accompanied by a liquid, melodious song. The nest is a well concealed grass cup in the shelter of a tussock, a shrub, a stone or fallen timber.

Lark-like, our ‘ground-lark’ is oft compared to the introduced Skylark so lauded by poets and composers for its flight display and evocative outpouring of song. This bird even has a collective noun – ‘exultation’. Australian Pipit, it could be argued, is just as deserving but has no assemblage noun and receives no such adulation.

† so named for Frenchman, Monsieur Richard de Luneville who collected that species in 1815.