Early European settlers were seriously confused by Musk Ducks. For many years, they were considered flightless, since there were no reliable accounts of them taking to the air and their wings were very small. It was thought that they walked to new waterholes during the night. Their unusual appearance gave rise to many tales of bunyips and they were described variously as resembling “a half grown black retriever dog” or “a creature about three feet long, with a neck of about 18 inches long, and almost the same thickness as the body. It had two big flopping ears and a shiny coat.” It was also believed that their nests had underwater entrance. Their strange and varied calls, sometimes made at night, contributed to the mystery and folklore surrounding them. 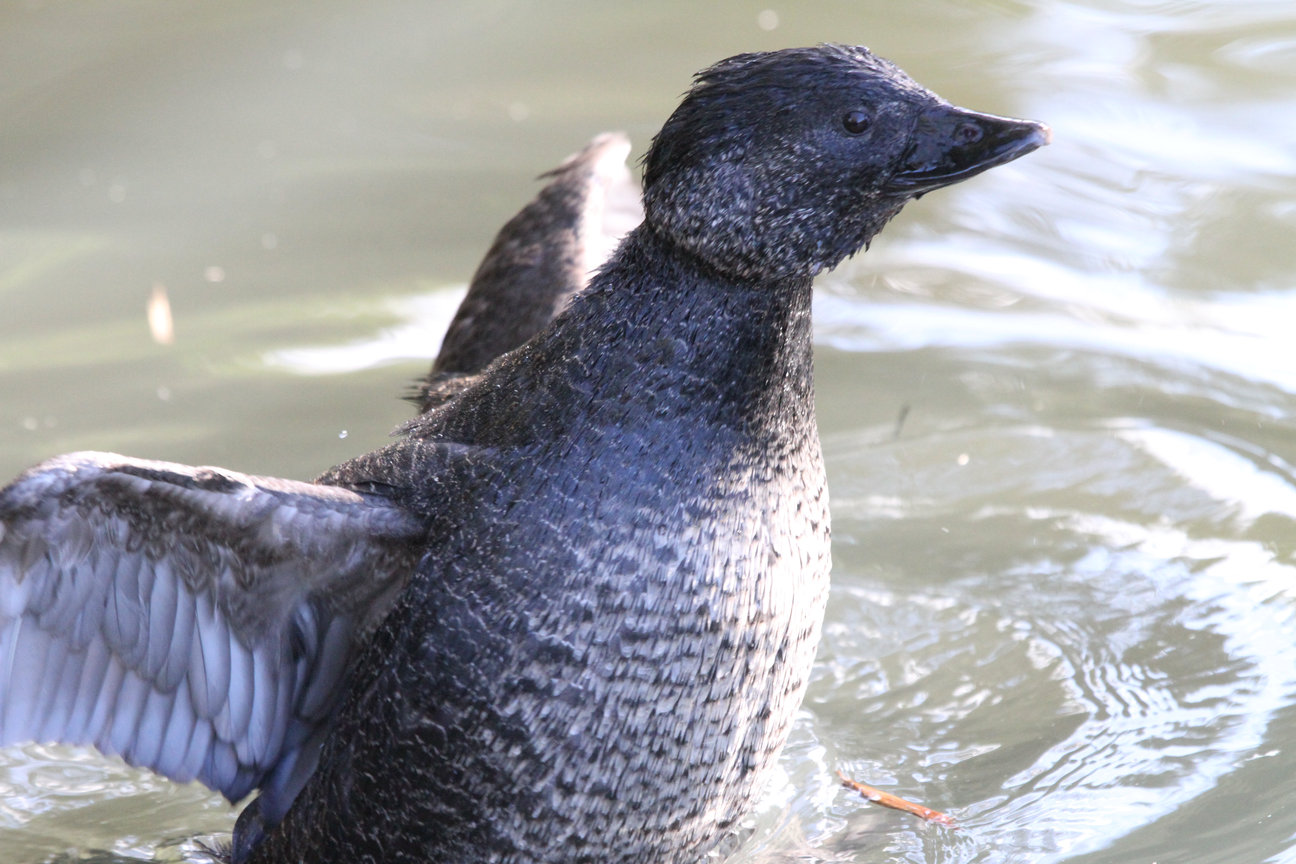 In fact, Musk Ducks are an ancient genus and are the only living members of Biziura, the New Zealand Musk Duck (B. delautouri) having become extinct in prehistoric times.

Musk Ducks are much more common in Tasmania, Victoria and eastern New South Wales, as well as the south-west corner of Western Australia, than in Queensland, and sightings here generally attract birders. The most common site is probably Lake Samsonvale, though they can appear in many places, including Dowse Lagoon at Sandgate and even on offshore islands, like the busy Lake Mackenzie on K’gari (Fraser Island). Our most reliable site has been Beardy Waters, just east of Glen Innes – over the border, so for the moment out of range! Musk Ducks are generally found in swamps, lakes and reservoirs, and even in coastal estuaries and inlets. They sometimes gather in flocks on large, open waterbodies in winter, though I think this is unlikely in Queensland.

Superficially, Musk Ducks resemble Freckled Ducks though they are distinguished by their stiff tails which can be carried either erect or lying below the surface of the water when they are swimming or floating. Both males and females sit low in the water. Female Musk Ducks can be confused with female Blue-billed Ducks, though their head and bill shape differs markedly. Male Musk Ducks are distinguished from females by the leathery flap hanging beneath their bills and by their size. Males are almost twice the size of females at perhaps 2.3kg in weight and 60-70cm long. In the breeding season, the males exude a musky odour, giving the species its common name and protecting them from being shot for the table. Many of the early press accounts of Musk Ducks and most other duck species related to how to shoot them and how to cook them! The toll on native ducks by shooters in the early days of European presence was horrific. This “sport” continues in some States today, though I believe Musk Ducks are protected, at least when hunters identify them correctly.

A pair settled in Sandgate Lagoon in 1918, giving rise to impassioned correspondence in the local press. Some observers firmly believed the Musk Ducks were eating ducklings, terrorising other waterbirds, and were in danger of leaving the lagoon devoid of other birdlife. Others defended them, saying they had yet to see a Musk Duck threaten other birds. Eventually the Town Clerk and an Alderman went to Sandgate Lagoon to see the fearsome ducks for themselves. The unfortunate male Musk Duck chose that moment to perform one of his “steamer” displays across the lagoon, scattering other birds. His fate was sealed and he was subsequently shot. Analysis of the contents of his stomach showed that he had been feeding almost exclusively on snails, known to carry liver fluke which threatened human health. The local authority ordered the duck to be stuffed as “an object of interest to visitors and others”.

It is now believed that Musk Ducks occasionally take ducklings of other species, but that they feed primarily on invertebrates, insects, fish and frogs and that they occasionally peck at overhanging vegetation. They are consummate swimmers and divers and spend most of their time on or under the water, coming ashore only rarely, in some cases to take bread from picnickers, though I have yet to see that in Queensland!

Males are territorial, and their spectacular display can attract a group of females. They arch back until their heads touch their tail feathers and paddle their feet to create fans of water, not dissimilar to the display of male Blue-billed Ducks. They also race across the water at high speed, perhaps the origin of their common name “steamers” or “steamer ducks”. We have seen this only in the distance, but the images should give some idea of the intensity of the activity. The displaying bird was a male, but we were unsure whether the other bird was male or female – was this a threat or a promise? 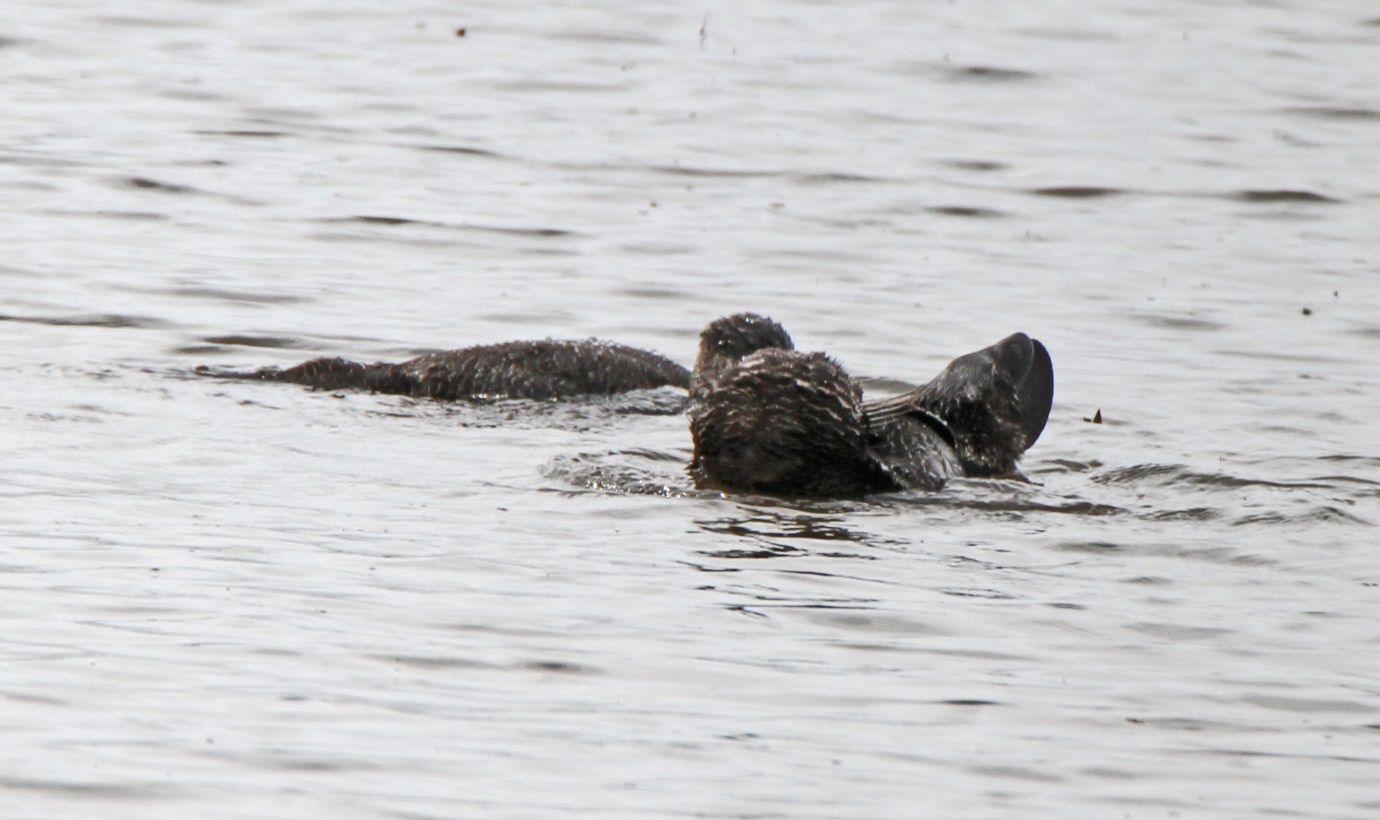 Females build their nests well-hidden in reeds in swamps, occasionally on a stump or clump of grass. Information on clutch sizes is scarce, though it is thought that clutches of more than four eggs have been left by a number of females. Females undertake all incubation, sliding under the water as soon as they leave the nest and diving some distance away on their return to avoid drawing attention to the nest site. When the chicks hatch, usually two or three, they remain with the female who feeds them until they are almost full-grown. She dives for food, and when she surfaces the ducklings rush to her begging loudly, reminiscent of Australasian Grebe chicks. 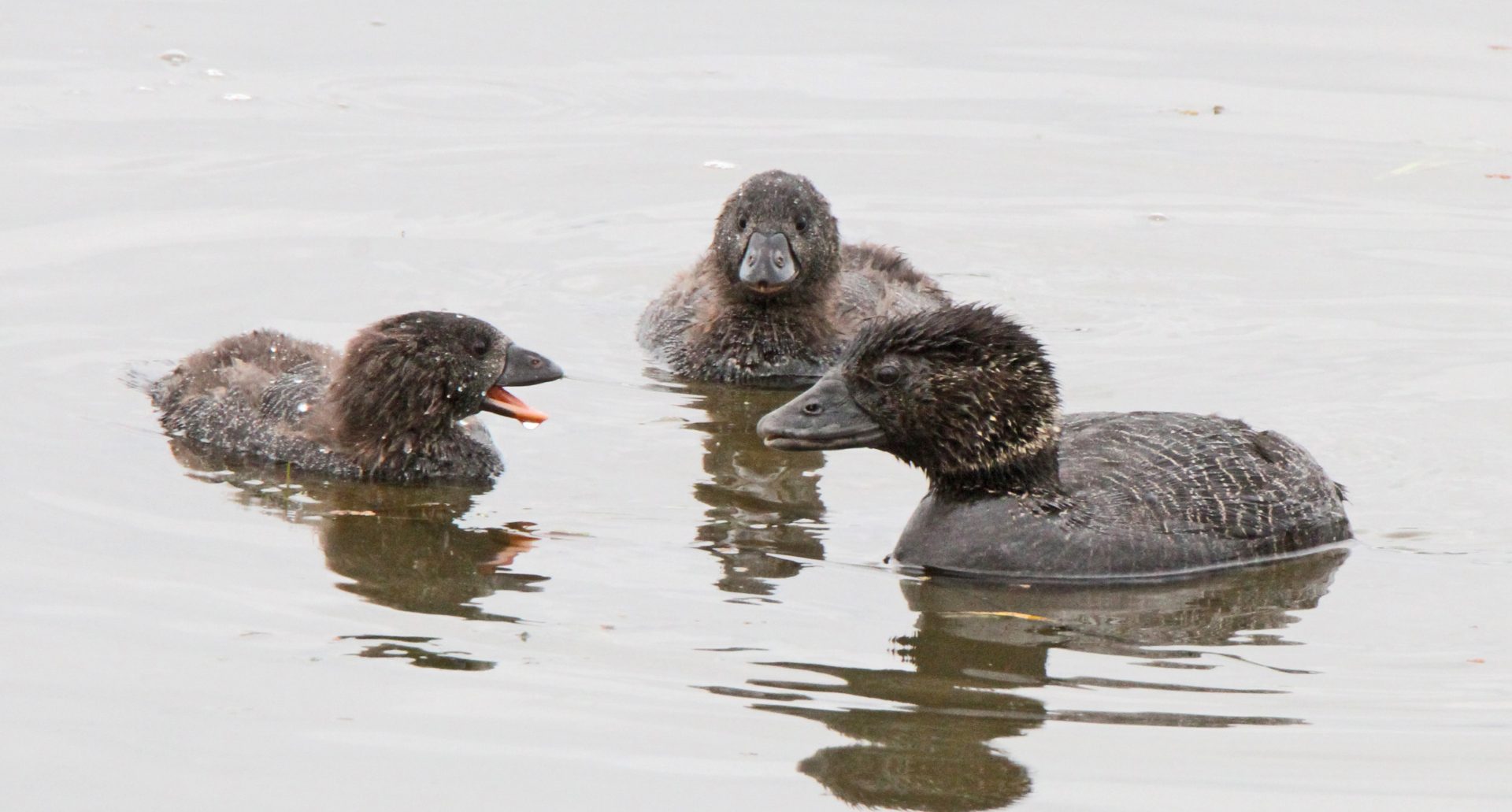