You are walking through dry eucalypt forest on undulating ground when you flush quite a large dark bird that flaps clumsily, almost moth-like, into the air, and then more elegantly glides off through the trees. In coastal and near-coastal eastern Australia you have almost certainly disturbed a White-throated Nightjar. This is the way most people come across nightjars, or perhaps they are seen hawking for insects in clearings, along watercourses or over the forest canopy, but they are difficult to see well unless you are fortunate enough to find one at rest (Photo 1).

The bird’s specific name, ‘mystacalis’ might suggest there is something mystical about this species (and perhaps nightjars in general), but it actually is derived from the Greek word for moustache and refers to the white marks on the side of the throat that give this bird its common name (Photo 2). 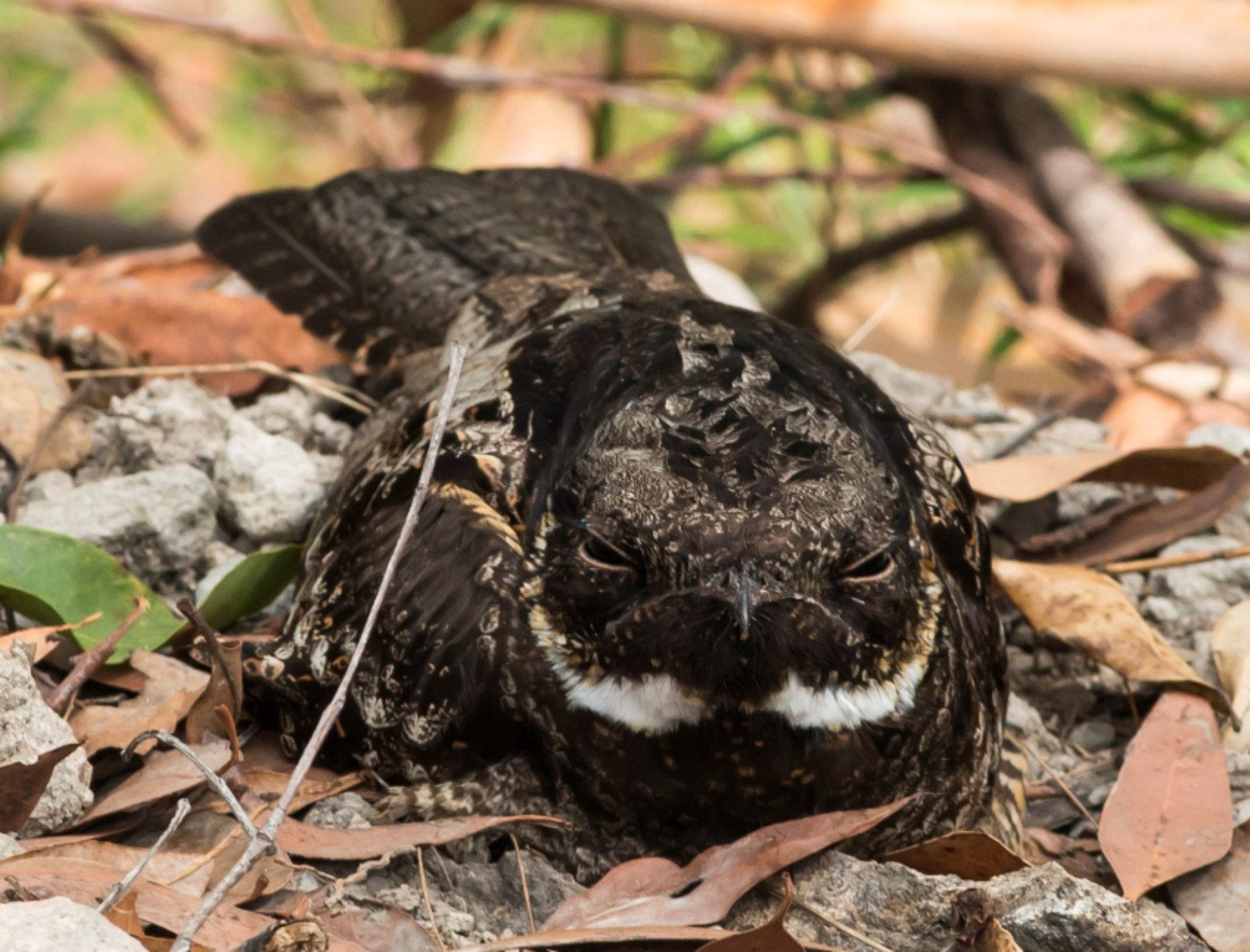 The White-throated is the largest of Australia’s three breeding nightjar species. Unlike many of the world’s approximately 90 types of nightjar, it lacks significant white patches in the wings and tail, and this is diagnostic for the species in Australia. (The Spotted Nightjar has conspicuous white spots on the wings, and the Large-tailed has them on both the wings and tail.) It is found in coastal Queensland, NSW and Victoria, but does not make it as far as Tasmania. The species reaches its furthest inland extent in Queensland, where it can range up to several hundred kilometres from the coast. Some of the Australian population, predominantly in Queensland, appears to be sedentary, but birds from the southern part of its range will migrate north in the cooler months to northern Australia and as far as New Guinea. Subspecies of White-throated Nightjar have been described from the Solomon Islands and New Caledonia, but whether these birds should be considered full species requires further work. In some places the White-throated and Spotted Nightjars overlap, but they can be distinguished at rest because the wing tips of the White-throated reach to the end of the tail, while those of the Spotted fall distinctly short.

Even though White-throated Nightjars are reasonably common, they are encountered relatively infrequently, so our understanding of their biology remains limited. For example, little is known about their behaviour and social organisation, and even their breeding biology is still not particularly well described. In view of this, there is ample opportunity for the keen observer to contribute to our knowledge of this species.

White-throated Nightjars usually breed in Spring and early Summer (October-December). During courtship the birds can be more conspicuous, with the male chasing the female in flight, and/or displaying to her on the ground by raising and lowering its wings. (Individuals have also been observed to raise their wings while walking on the ground, although with their short, weak legs they are not well equipped for this activity, and in distraction displays (Photo 3).) 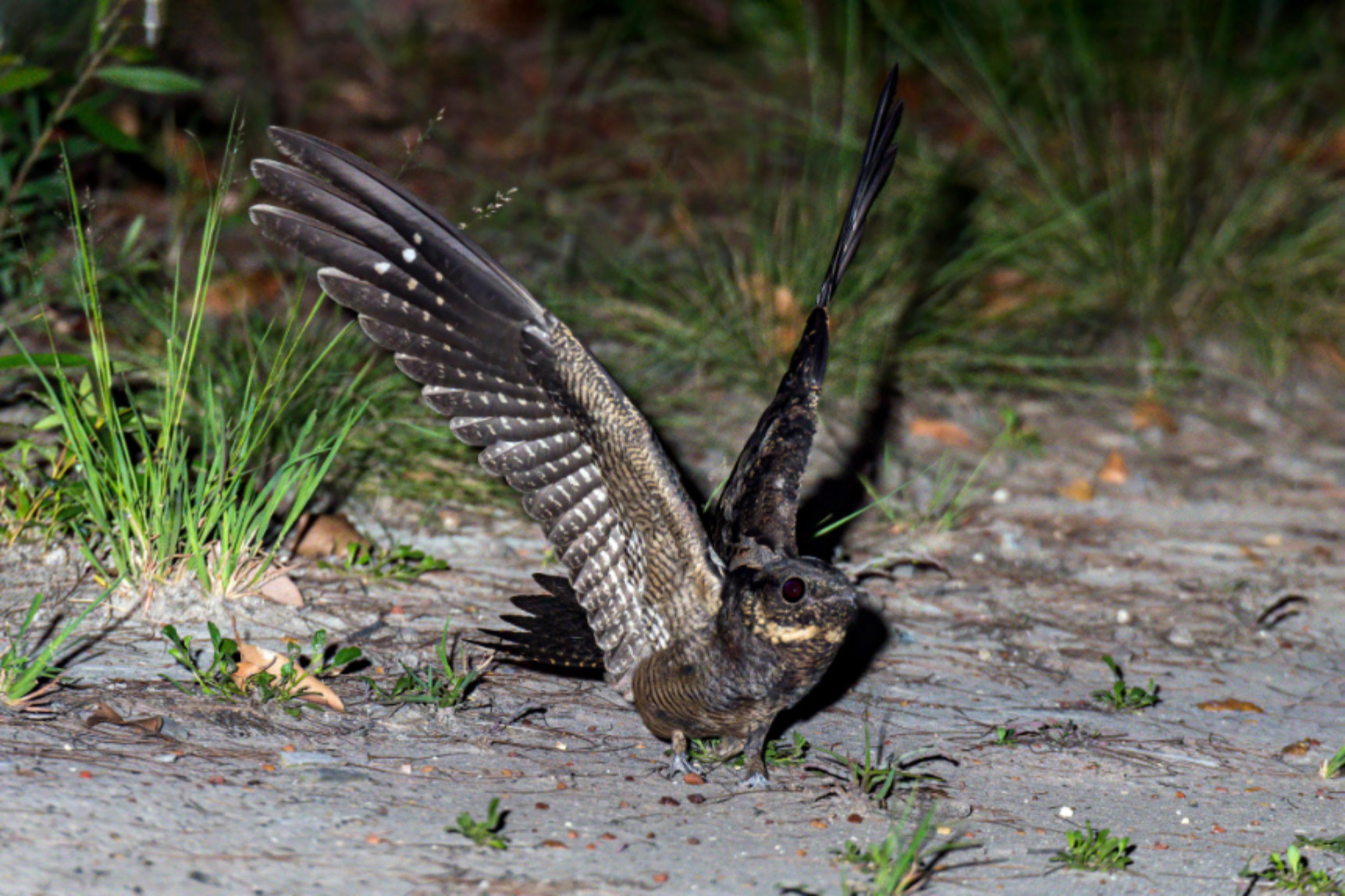 Females lay one pale-coloured egg in a simple depression on the ground, which is often near a log or a rock. This is typically in leaf litter where the mottled grey-brown plumage of the bird makes it very difficult to detect while it is brooding. Despite its relative abundance, there are few well-documented breeding records of this species, but data suggest an incubation time of 23-28 days. After hatching, the young moves progressively further away from the nest site each day. It is brooded by the parents for approximately 10 days, and its parents stay nearby until the chick fledges at about 30 days.

For the birder, one of the convenient characteristics of White- throated Nightjars is that they can show a high degree of fidelity to their roosting sites. If you do flush one when you are out in the bush, make a note to look very carefully when you next pass that spot. You may be fortunate to spot the bird roosting and have the opportunity to study it in detail. The bird shown in Photo 1 is at a site where I have seen the species multiple times over the last 15 years, and it is quite possibly the same bird, although I have never seen a nest at this location. While this species roosts on the ground most of the time, on occasions they roost on logs or tree branches (Photo 4) 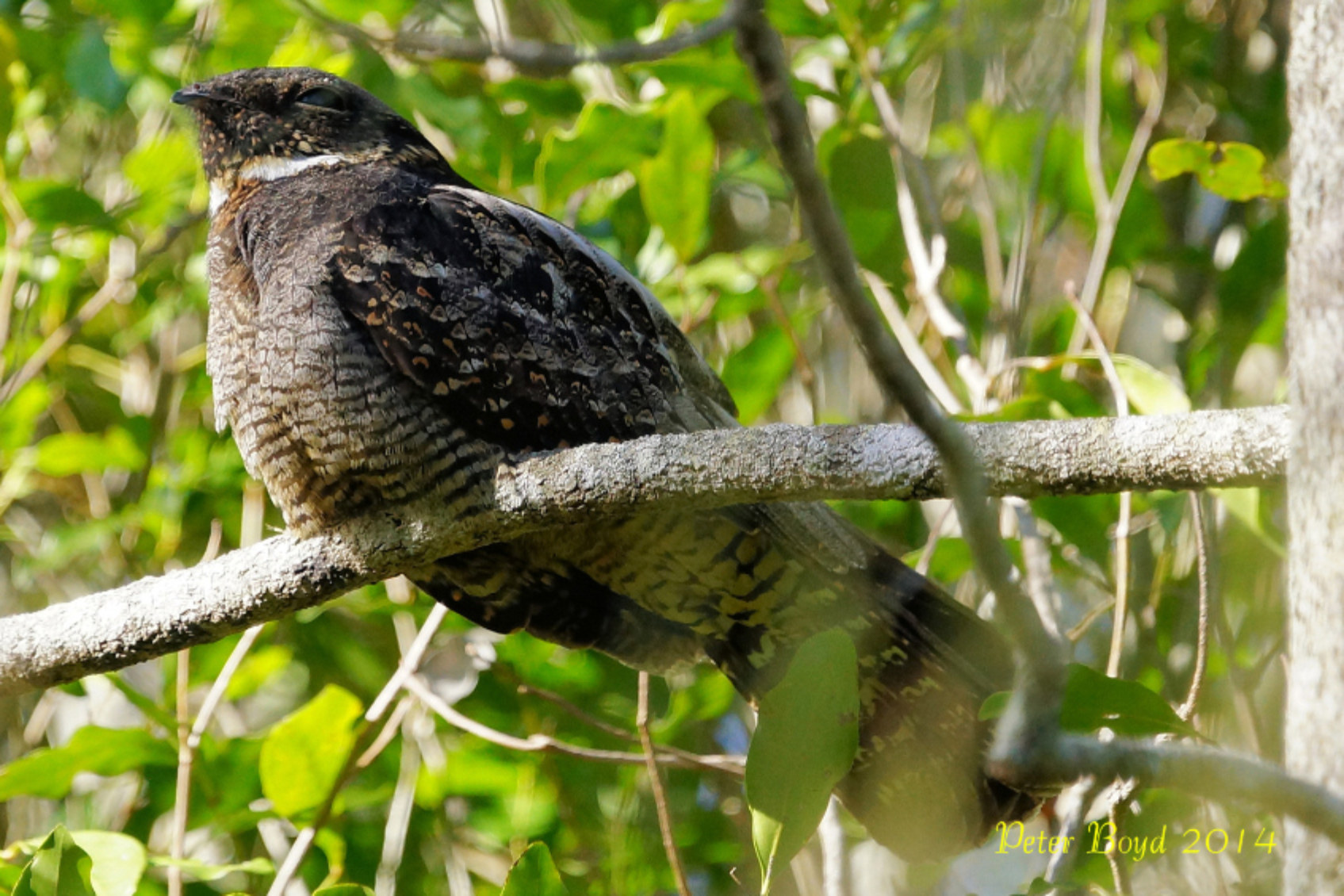 White-throated Nightjars are not particularly vocal and call mainly during courtship, but their call consisting of a series of ascending, accelerating bubbling notes is distinctive. They have another call which is a low, slowly escalating coo coo coo or kook kook kook, that sounds remarkably like a Laughing Kookaburra warming up. I remember three of us once listening to such a call coming from a forested ridge at pre-dawn, but not being able to clearly say whether it was a nightjar or a Kookaburra, so listen carefully!