The Environmental Impact Statement for the Walker Group's proposed development at Toondah Harbour has been released and submissions from the public are now open.

Most of you will be aware of the proposed development at Toondah Harbour by the Walker Group and that this will destroy a part of the RAMSAR wetlands. It will have adverse consequences on our shorebird populations, many of which are already under pressure. The Environmental Impact Statement (EIS) for this development has been released and is available on the official web site .

Now is the time to make a submission in response to this EIS with the aims of:

A submission is not a waste of time and effort. A large number of individual submissions makes a difference as does a letter to the Minister.

This link will take you to Ch17 of the EIS; MIGRATORY SHOREBIRDS

The development will have adverse consequences on our migratory shorebird populations, many of which are already under pressure and endangered. One of these species, the Bar-tailed Godwit has just been recorded as flying an astounding 13,560 km non-stop in 11 days and 1 hr from Alaska to Tasmania. 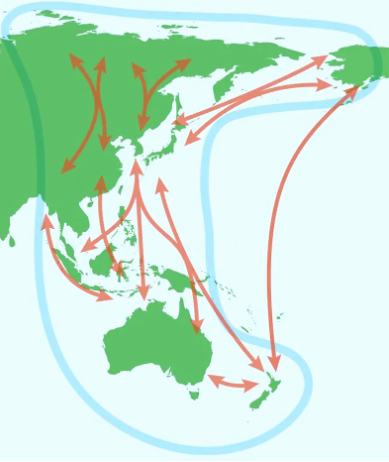 Australia is a signatory to the RAMSAR treaty that lists and protects the most environmentally important coastal and inland wetlands around the world.

Under the treaty, development can only take place in these areas if it is a matter of urgent national priority. The Toondah Harbour residential development is not such a project.

Proceeding with the Toondah Harbour development would undermine the protection of RAMSAR sites in Australia. When so much of our wildlife is facing considerable pressure we must be expanding and improving protection, not decreasing protected areas that contain critically important habitat.

The consultation period is 40 business days so the deadline for making submissions is 6th December 2022.

Electronic submissions about the draft EIS should be emailed to Walker Group at: engage@toondah.com.au. Redlands2030 have stated that submitters are welcome to cc a copy to them at: thereporter@redlands2030.net

The Albanese Government has a great opportunity to demonstrate to the world its commitment to ending extinctions and protecting our natural environment by declaring its opposition to Walker Corporation’s Ramsar-wetland-destroying real estate project. A letter can also be sent to the Minister for the Environment. A possible draft is below.

Minister for the Environment and Water
Hon Tanya Plibersek MP

I am writing to you on two matters. Firstly I want to congratulate you on your Government’s zero extinctions target for the country’s plants and animals and the plan to protect an additional 50m hectares of land and sea area by 2027. This is a laudable and achievable goal.

The second matter concerns the Toondah Harbour development on Moreton Bay in Queensland. You would be aware that the development involves the destruction of RAMSAR listed wetlands and puts further pressure on our already threatened shore birds, a number of which are critically endangered. I ask that as a first step in the zero extinction goal, this project be rejected.

We cannot prevent extinctions if we continue to allow the piece by piece destruction of critical habitat. It is death by a thousand cuts.

The Albanese Government has a great opportunity to demonstrate to Australians its commitment to ending extinctions and protecting critical habitat by declaring its opposition to Walker Group’s RAMSAR-wetland-destroying project.

Remember to add Your Name

Birds Striking Windows – what you can do

September 8th 2022
Birds Queensland has produced an information sheet with advice on helping reduce the chances of birds hitting windows as well as what to do if you find an injured bird.
Read more

April 14th 2022
The Management Committee is closely monitoring official advice on Coronavirus from the public health government sources. Some activities have recommenced but with restrictions. We consider it appropriate to recommend prudent and practical precautions generally and also when involved in Birds Queensland activities. These are outlined below:
Read more